The purpose of collecting God Sightings is to record some of the amazing ways God has blessed events
and people in our community of faith. Often times we plan for an event and God expands the reach.
These brief stories capture some of those moments of deepening our faith.

Prairie Lutheran Church has been blessed by a generous God and generous people. In
the year 2000 the leadership of the congregation embarked on an audacious plan;
double the size of the facility and thereby make room to grow the congregation. The
congregation turned outward to welcome newcomers and allow the Holy Spirit to move
more freely.

One very practical matter that needed to be addressed was the cost of new construction. The price tag for a new addition ran well over two million dollars. The Building Committee met with bankers to determine a plan. The bankers came back and stated that in order to receive a construction loan at least one million dollars needed to be pledged by members of the congregation. Pastor Joel went to the Region 3 office of the ELCA in St. Paul, MN to enquire about any assistance and advice. Pastor Joel supplied them with the required membership numbers and financial data of the congregation. During the meeting the representative informed Pastor Joel that PLC fell outside the minimum parameters of aid and PLC did not qualify and construction was not recommended.

Leadership went back to the table and back on their knees. Their prayer was; to go forth
in faith and keep up the momentum, or wait until a future and safer time. There was a window of time of two months in which they needed to tell the bank it was a go or not. Like Gideon, when he put out the fleece, the leadership decided to test the congregation. Let’s put out ‘the ask’ and see if we can raise the one million dollars that is needed. Eight weeks later on June 1, after many personal and face to face conversations, over one million dollars was pledged by members of the congregation!

The bankers, the professional fund raiser, the ELCA representatives were all blown out
of the water. God decided to bless our yes! Documents were signed, schedules were
drawn up, contractors were contacted, and the dollars started to come in. On April, 2001
the congregation processed outside after worship and celebrated the ground breaking
on the site where the entrance to the new sanctuary would stand. Hearts were opened.
Pocket books were opened, so that new doors could be opened to the community!

Our ceilings are held up by prayers!

On Sunday, September 9, 2001 members of Prairie Lutheran Church gathered for the annual Rally Day worship and kick off of the program year. A carnival and BBQ was hosted between services.

Two days later, our nation was rocked with the tragic events of 9/11. That Tuesday afternoon Pastor Joel happened to talk with Joe, the site supervisor, about that morning’s events. A prayer service was to be held the next evening during the Wednesday Midweek Community gathering. Spotting a stack of 4x8 sheets of plywood, pastor asked Joe if he could use them the next day. Joe said fine and helped carry 12 sheets of plywood into the sanctuary, (now the Great Hall). Together they arranged them along the walls of the sanctuary and set out 12 baskets filled with permanent markers.

On Wednesday evening the community gathered for a prayer service of listening, talking and reflection. Afterwards, participants were invited to write their prayers on the sheets plywood that leaned against the walls. In reverent silence, hundreds of prayers were written by young and old on these dozen panels of wood. One by one people walked into the night having left their prayers for healing and hope.

The next day, Joe had some of his crew remove the plywood and restack them in the work site. Pastor Joel went out to thank Joe for loaning the plywood and explain how powerful the prayer service had been the night before. In passing Pastor Joel asked how the sheets of plywood were intended to be used. Joe explained they were destined to be used for the ceiling of the new sanctuary. Drywall and textured paint would cover them from the interior and shingles would be nailed to them for the exterior roof. In other words, the new sanctuary of Prairie Lutheran Church would forever be literally covered by prayer!

The year 2000 was a pivotal year. It marked the start of a new century and the beginning of a new millennium. It also marked the turning point in the life of Prairie Lutheran Church. For the previous two years, the leadership of PLC prayed, planned and proposed to expand the reach and mission of its ministry. For a number of years the congregation had turned inward and content with its accomplishments. Spurred on by a Long Range Visioning team the Congregation was presented with a vote; expand the footprint of its facilities and the extend reach of its mission. This would entail initiating a capital campaign committee and a building expansion committee. The first concrete step was to hire an architect to create renderings for a new facility; including doubling the size of the sanctuary and additional meeting and learning spaces.

The vote to approve and move forward with the building campaign meant taking on the cost of the initial architectural drawings. Gathering information form architectural firms it was determined that the initial renderings for a new building would cost $12,000. These were funds, however, that were not allocated in the current operating budget. The congregation, in an act of faith, voted to move ahead with the recommendation.

Later that week, an envelope arrived in the church office from Hennepin County. The enclosed letter explained that Pioneer Trail - County Road 1, was to be expanded from a two lane to a four lane divided highway. Portions of the property of PLC would become part of the easement and needed to be surrendered to the county for expansion of the roadway. In light of the cost of ceded land a check for $12,000 was included with the letter! The exact amount that was needed to cover the costs of the architectural drawings was covered. Faith was rewarded with funds!

On Sunday, November 4, 2018, members of Prairie Lutheran Church responded to a national tragedy in Pittsburgh, PA. The weekend before, on Saturday morning, October
27, a gunman killed eleven people inside the Tree of Life Synagogue in the Squirrel Hill
neighborhood. They were murdered because they were Jewish; another hate crime that
has become all too frequent in America.

After the conclusion of the worship services at PLC on Sunday, November 4, everyone was invited to write a note on a set ‘Sympathy Scrolls’ that were laid out on two conference tables in the lobby. Each scroll measured 8 by 2.5 feet. All along the edges of each scroll was written in Hebrew the Mourners Kaddish. These holy words are spoken as part of the Jewish mourning tradition. These liturgical words created a frame to the hundreds of messages that people wrote to the Tree of Life Synagogue. It was a simple expression of solidarity from one faith community to another. The message was clear. “We may be separated by geography. We will not be separated by hate.” Because of the busy activities of the morning, the tables were left out in the lobby. At 5:00 that evening a Girl Scout event was being held in the PLC sanctuary. When the young girls arrived the tables were still set up and needed to be moved out of the way. A local Girl Scout leader asked one of the new groups to help her move the tables aside.

When these girls approached the table they began to look at the scrolls and commented, “Who wrote these words in our own language?” It turns out this was a troop made up of Jewish girls and was their first time at a Girl Scout event, much less a church. They began to cry in appreciation and said, “Why would Christians write sympathy for Jews?!” Through tears, our leader explained that PLC was reaching out to the survivors of the Pgh synagogue. God began to heal the tragedy even before the scrolls were sent to their final destination! The following morning the scrolls were rolled up and sent to Pittsburgh.
‘Exalted and hallowed be God’s great name in the world which God created.’ 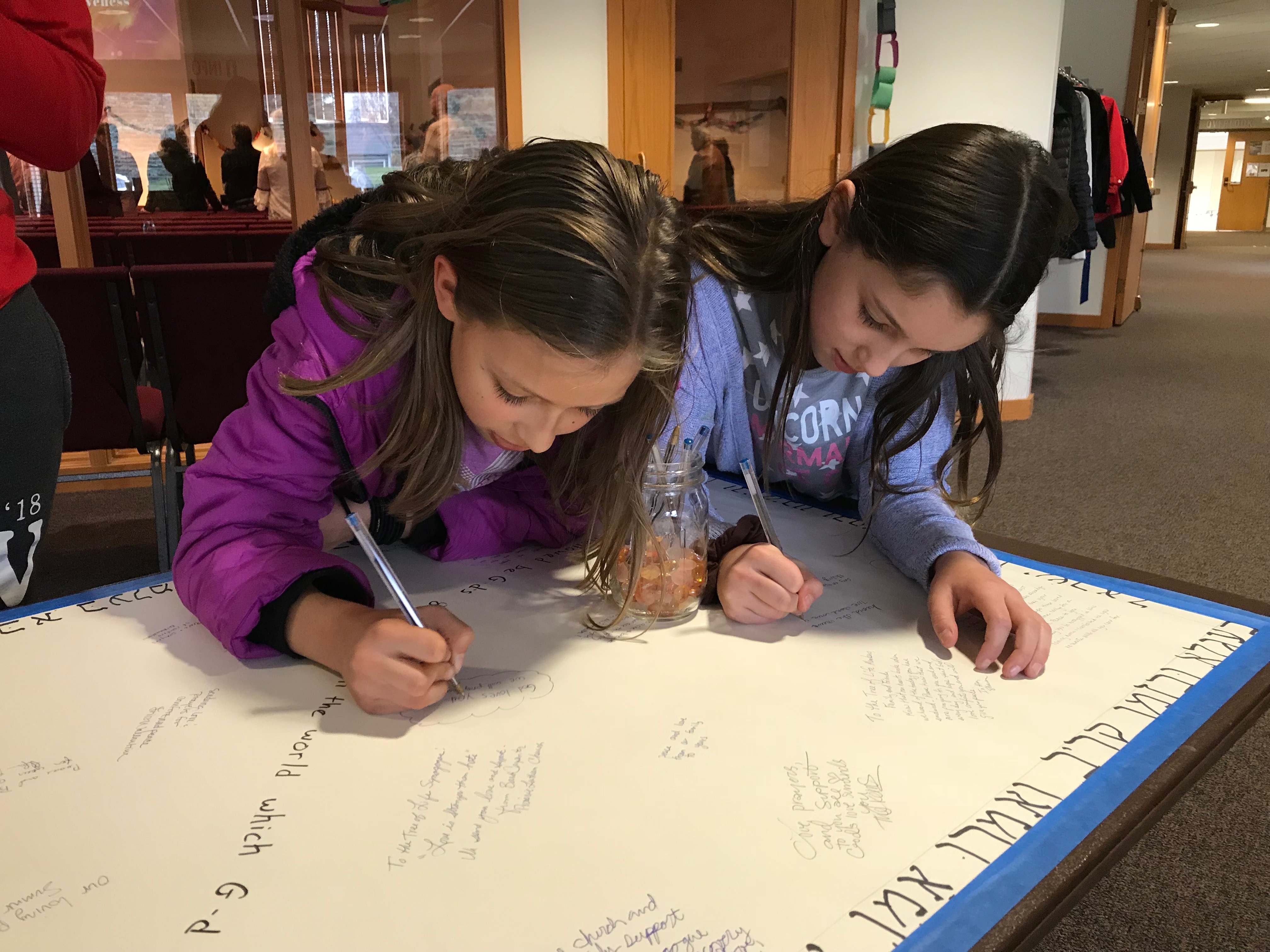